This BBC article pointed out that two of the most active countries are Uganda and Mozambique. Another BBC article explored the Uganda situation in a bit more detail. It asked “So what is Uganda getting right? … People in rural Uganda, where most of the population lives, are very active on their farms, says the BBC’s Patience Atuhaire. But, she says, in urban areas people are becoming more sedentary, especially as they get wealthier.” Evocative imagery accompanies the news item: 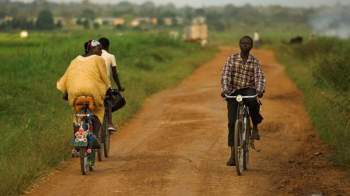 All of this leads me to ask three awkward, but necessary questions:

PS: The political nature of this issue (how people should be organised in society and what they should do), does remind me  of something I wrote 11 years ago, available here. I critiqued the strange New Zealand policy of aiming to be “the most active country in the world”. Of course not only did New Zealand never have a chance at the title, but also the goal itself is morally problematic. The implicit rationale of trying to be more active than another country is that you want another country to be less active, and therefore, less “healthy” than your own. This, I argue in academic parlance, is crazy.