I have not been to an ISPAH conference since Rio, 2014. I have noticed quite a few changes since then. It seems more mature now. The talks I saw involved critical reflection, and there were entire sessions dedicated to health inequalities. And it was great to see far less Coca Cola, and much more “co-creation” (see what I did there).

Given the propensity for graphs at the conference, here is another one: 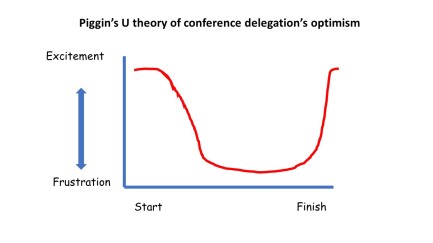 What the chart above shows with magnificent precision is that after initial calls for and hopes for change at the start of conferences, research presentations often are forced to acknowledge a lack of policy traction, barriers to implementation and modest intervention success, as well as many arguments about what best practice actually is. Along with this is often palpable frustration about the “slow progress” of policy change and the subsequent hoped-for population change. Maybe this is an essential part of all conferences, especially ones which are associated with major public health goals.

Set in the Brutalist QE2 Conference Centre in the heart of London, it is clear ISPAH is becoming physically and politically closer to decision makers around the world. While intersectoral partnerships take time to cultivate, it seems progress is being made. Professor Fiona Bull, working for the WHO on disease prevention, is a spokesperson for the movement and a connected and successful policy entrepreneur in the realm of PA promotion. And it appears there is an ever-growing legion of evangelical enthusiasts making connections with the various sectors, from state to transportation and town planning.

“Systems approaches” continued to get a lot of air time throughout the conference. Mapping systems is a logical and noble pursuit, though the limitations need to be, and were, acknowledged early in the conference.

While a small point, I would encourage no one to call the Morris et al London busmen study (1953) the “birthplace of physical activity”. Two presenters seemed to do so. Perhaps it was a slip of the tongue(s), or clunky explanation, as I’m certain “physical activity” was born earlier than 1953.

Overall, ISPAH 2018 was a slick affair, which ended with challenges and optimism. The WHO target of a 15% change in global activity levels by 2030 is a lofty goal – I suspect that aiming for less would not generate the political will to mobilize resources and change minds about the seriousness of the issue.

I have always intuitively favoured the social benefits that come from physical activity, as opposed to the changes in disease risk. Perhaps that is just my personal bias. Upon leaving the venue, one delegate, carrying a WHO football was accosted by one of the conference centre doormen, who enthusiastically exclaimed “Throw it here”. Two strangers briefly throwing a football to each-other might not lower the risk of anything, but it shows humans crave connection with one another. ISPAH are trying to make the world a better place, and it seems they are gaining traction. Maybe I should join?