This video from the NFL is quite disturbing. The NFL calls it an “extended conversation that covers all sides of youth sports and safety.” It is actually only 2 minutes and 51 seconds of conversation, much of which is based on anecdotes from the various mothers involved.

Part 2 is also disturbing. Here a “mom” asks “What is your opinion on how many concussions is too many? For example, my son is 10. He’s already had 2.” Later, one mother says she thinks had had more concussions than her former NFL-playing husband because … “I’m only 5ft5. I play basketball. I get hit in the head so many times …”

I’m no neuropsychologist like Dr. Elizabeth Pieroth (one of the moms), but my relatively intact brain thinks that we should aim to avoid harming the brains of children. This means getting rid of full contact American football for children.

Yes, I know the title is provocative. I believe one important “fact” about physical activity is being repeated to parents, teachers and children in schools across the USA and elsewhere around the world.  The repeated claim is that physical fitness can increase test scores by 40%. But I contend it is not a “fact” at all. It is a fallacy.

The timeline shows how this “40% fallacy” came to be.

A few years later, Nike, The American College of Sports Medicine (ACSM) and the International Council of Sport Science and Physical Education (ICSSPE), and supported by many others organisations and scientists, publish Designed To Move, a lobby document promoting physical activity. It includes this image (p. 17): 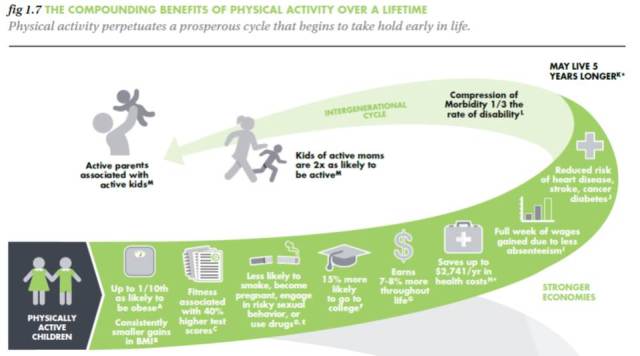 A close up shows a claim that “Fitness is associated with 40% higher test scores” (p. 14) and a reference to Grissom’s article (you can see the little c).

This is concerning because the title of the image infers there is an extremely large causal relationship whereby fitness leads to higher test scores. The title of the graph refers to “compounding benefits” and “a prosperous cycle” from physical activity. Remember, Grissom did not claim this. In fact, he warned against concluding from this study that physical activity leads to higher test scores.

So I had another check of Grissom’s research and I think this is the graph that Nike, the ACSM and the ICSSPE used to claim their “40% higher tests scores”. As you can see below, yes, there is a relation between the Stanford Achievement Test and how many fitness standards are achieved.

But remember what Grissom wrote about his research. The research shows a correlation, not causation. A preliminary study. …. One could just as easily conclude that mental capacity affects physical ability. He also wrote about how socio-economic status has a large role in both test scores and fitness levels, as I am sure we would intuitively appreciate. So we shouldn’t jump to conclusions about this.

This is where the “40% higher” claim starts being used to promote physical activity around the USA. Of course, I am not arguing against PA promotion. But I am beginning to see why an organisation would want to say that physical activity can lead to 40% higher scores. Not only for more active populations. But so they can get into schools and promote it, along with their brand. This is indeed an excellent marketing strategy. For more on the Trojan horse tactics used by corporations to target children in schools, see this study by Powell and Gard.

Now it is the UK’s turn to hear the “40% higher tests from physical activity” claim . In the UK, in 2014, there was a physical activity campaign called “Move1hour”. (As an aside, Move1hour did have a facebook and twitter account but these have been deleted. A short lived social movement indeed!) However, you can see from the Designed To Move facebook page how the “40% increase”claim has been used to encourage physical activity. It has become fact.

My view is that saying children “can score 40% higher on tests” is a manipulation of the original research to the point where it is deceptive. Not intentionally deceptive. But still deceptive. I suspect that the enthusiasm of some evangelical physical activity promoters is overriding reflective, considered practice.
Joe Piggin

Some caveats: Of course there are numerous reasons to promote physical activity in schools and I appreciate many organisations are just trying their best with limited resources to promote it. But we should be wary of evangelism.

Co-operating with corporations for health promotion is problematic, despite it being a practice endorsed by the World Health Organisation. While no stranger to criticism, Coca Cola is now trying is limit the damage from this latest New York Times investigation. The Times exposes some more links between corporations and health scientists. The accompanying video is also compelling viewing. One does not need to be a critical researcher to appreciate how the repetition of “balance” in the video appears somehow … unbalanced.

It reminds me of another example of how a corporation has ingratiated itself within academia (and how academics have ingratiated themselves with corporations). In 2013, the Journal of Physical Activity and Health published an article about the wide-ranging benefits of physical activity (Bailey et al, 289). The article proposed the Human Capital Model, which theorises that physical activity can contribute to various forms of capital for an individual, including emotional, financial, individual, intellectual, physical, and social capitals. The article is “aspirational”, though it is also troubling. The “Human Capital Model” was not produced by the authors of the article, but by Nike Inc. Why is Nike, a global sportswear company, interested in publishing a theoretical model in an academic journal? The Acknowledgements section in the article suggest how the model came to be: “In 2010 NIKE, Inc. developed the Human Capital Model, informed by more than 500 pieces of published research, and initiated a multidisciplinary input and validation process with a pool of experts.” (p. 302) Nike also holds the copyright to all the models and figures in the article including Figure 4, below, which claims that Financial Capital is “reliant on the other Capitals” (p. 301):

The flow chart above contains many very troubling assumptions. First, there are surely many people around the world who have high levels of financial capital without having a significant amount of physical, emotional, individual, intellectual or social capital. Even a cursory analysis of one’s own social network and community (or personal introspection!) might provide examples to show the fallacy that financial capital is “reliant on all the other capitals”.

Second, it is readily apparent that many forms of capital depend on possessing or being born into families with financial capital to begin with. At least in Western neoliberal societies anyway. We are all born into already-constituted communities. The advantages and privileges afforded by having access to financial capital are clear.

Third, the elevation of financial capital to the pinnacle of the figure implies that money is the desired outcome to be attained. Framing financial capital as the outcome of various forms of capital is perhaps the most overt display of Western neo-liberal thinking articulated in a scholarly journal on physical activity to date. Possessing any or all of the forms of capital in the model is simply a way of acquiring something else – money. Of course, Nike is obligated to make a profit for its shareholders, but we need to recall what a singular focus on increasing financial capital can lead to. In 2005, Nike’s own report of the factories that made its shoes and clothing admitted “excessively long work weeks, wrong wage calculations, verbal abuse, curbs on toilet visits” and a pervasive culture of exploitation. Nike’s admission of worker abuses occurring shows how those with financial capital can exploit those without.

Fourth, nowhere in the article is any evidence provided for the claim: “Financial capital: reliant on the other Capitals.” Should we expect higher standards from a publication in the Journal of Physical Activity and Health?

Coca Cola, like Nike, must not only make profit, but must continually try to grow profits. Physical activity researchers must give more critical attention to these corporate imperatives, and be prepared to reject their advances despite the lure of magnificent increases in personal financial capital! Perhaps the shame of being compared to “big tobacco” apologists might encourage others to reflect on their associations with “big sugar”. I encourage you to read this incisive account of Coke at the world’s largest physical activity conference in 2014. We will wait and see if ISPAH 2016 continues to be sponsored by Coca Cola. Popular rhetoric about PA promotion calls for radical change and revolution. I end this post by calling for a radical rethinking of corporate linkages.  Watch this space – literally! Joe Piggin

This blog explores the emerging Zeitgeist of physical activity. Physical activity is being used by a many organisations to achieve goals such as health, productivity, social inclusion and sustainability. I consider the effects that these policies, interventions, programmes and campaigns have on how people. More specifically, the political dynamics involved in physical activity are the focus. Macro-politics, micro-politics and everything in between.

Critiques of food politics www.foodpolitics.com and obesity politics are well known. Here I examine how physical activity is laden with values and used in order to (try to) achieve particular economic, health and social outcomes.