Why is so much attention given to physical activity? Why do we care about it? Why is it in policy?

To answer this, in my book, I argue that we should think of physical activity as a specific political discourse.  Discourses are forms of knowledge, so they govern the way a topic can be meaningfully talked about or reasoned about, and they influence how policy ideas are put into practice. So instead of thinking about physical activity simply as human movement, from a policy perspective it is much more than that. Here is a brief explanation of my thinking …

The physical activity discourse, I argue, has not emerged out of nothing. Other discourses, like ingredients, have facilitated the escalation in physical activity’s rise to prominence and legitimacy. For example, consider the obesity epidemic which has framed human bodies as susceptible to specific judgement and surveillance (see Gard and Wright, 2005). The rise of surveillance technologies which affect both leisure and work has allowed physical activity to be measured ad infinitum (and ad nauseum).

Of course, the discourse does not necessarily appear with all these ingredients. It needs a raft of committed “bakers” who will devote time and attention to escalate and seek legitimacy for the physical activity problem. Networks are needed, most obviously manifesting as scientific associations of physical activity. And along with these scholarly societies come links to industry and the state.

And after scientific elements establish legitimacy, the physical activity discourse is continually built upon and deployed in different spheres, with frontiers in all directions. Indeed, this framework for thinking about the physical activity discourse is not intended to be static. There will be specific contexts which frame physical activity in unique ways. That is part of what makes the discourse a potentially powerful policy driver. Its hybridity and its potential omnipresence as a matter of concern (affecting all domains of human life) means that it can be potentially infused into all sorts of policies.

The model below shows how a range of “forms of knowledge” work together (and / or separately) to produce what we know about physical activity (particularly in many Western, developed societies). 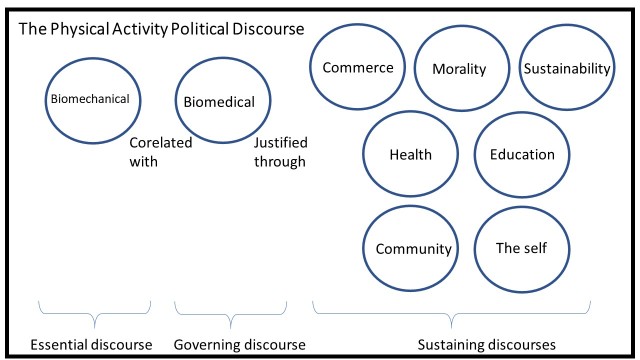 While I suggest biomechanics is an essential discourse, it does not carry a great amount of disciplinary weight when physical activity is researched, analysed or justified. Human movement without values added is not enough to produce and sustain the physical activity discourse. More influential is the biomedical discourse, which has made connections between physical activity, health, and death rates. (There’s more in the book on this!). Various sustaining discourses shown above allow for physical activity to be deployed at different times in texts, policies and programmes by a wide array of different organisations. You can see “health”  is only one of many discourses that sustains current concern about it. Many other discourses contribute now too.

This discourse has real implications. Correlating insufficient physical inactivity with all manner of economic, health, environmental, and inter-personal outcomes leads to a number of flow on effects, including the production of new experts, new expectations, authoritative organisations and specific ideas about social order.

I argue that by seeing viewing physical activity in this way – as a discourse made up of the interplay of other discourses (and not simply as a means to promote public health) – we might better appreciate how the swirling and growing mass of concern about physical activity affects us all.

The Politics of Physical Activity REFERENCES

One thought on “Why are we thinking about physical activity?”