Yes, I know the title is provocative. I believe one important “fact” about physical activity is being repeated to parents, teachers and children in schools across the USA and elsewhere around the world.  The repeated claim is that physical fitness can increase test scores by 40%. But I contend it is not a “fact” at all. It is a fallacy.

The timeline shows how this “40% fallacy” came to be.

A few years later, Nike, The American College of Sports Medicine (ACSM) and the International Council of Sport Science and Physical Education (ICSSPE), and supported by many others organisations and scientists, publish Designed To Move, a lobby document promoting physical activity. It includes this image (p. 17):

A close up shows a claim that “Fitness is associated with 40% higher test scores” (p. 14) and a reference to Grissom’s article (you can see the little c).

This is concerning because the title of the image infers there is an extremely large causal relationship whereby fitness leads to higher test scores. The title of the graph refers to “compounding benefits” and “a prosperous cycle” from physical activity. Remember, Grissom did not claim this. In fact, he warned against concluding from this study that physical activity leads to higher test scores.

So I had another check of Grissom’s research and I think this is the graph that Nike, the ACSM and the ICSSPE used to claim their “40% higher tests scores”. As you can see below, yes, there is a relation between the Stanford Achievement Test and how many fitness standards are achieved. 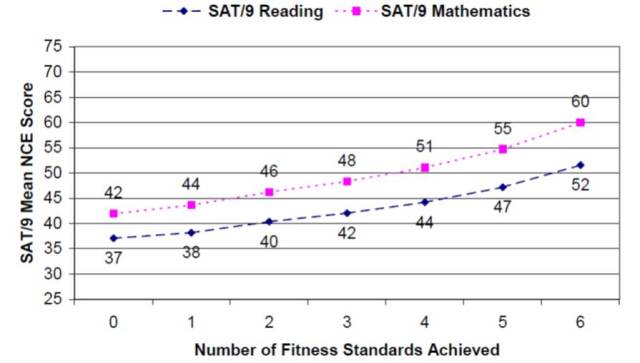 But remember what Grissom wrote about his research. The research shows a correlation, not causation. A preliminary study. …. One could just as easily conclude that mental capacity affects physical ability. He also wrote about how socio-economic status has a large role in both test scores and fitness levels, as I am sure we would intuitively appreciate. So we shouldn’t jump to conclusions about this.

This is where the “40% higher” claim starts being used to promote physical activity around the USA. Of course, I am not arguing against PA promotion. But I am beginning to see why an organisation would want to say that physical activity can lead to 40% higher scores. Not only for more active populations. But so they can get into schools and promote it, along with their brand. This is indeed an excellent marketing strategy. For more on the Trojan horse tactics used by corporations to target children in schools, see this study by Powell and Gard.

Now it is the UK’s turn to hear the “40% higher tests from physical activity” claim . In the UK, in 2014, there was a physical activity campaign called “Move1hour”. (As an aside, Move1hour did have a facebook and twitter account but these have been deleted. A short lived social movement indeed!) However, you can see from the Designed To Move facebook page how the “40% increase”claim has been used to encourage physical activity. It has become fact. 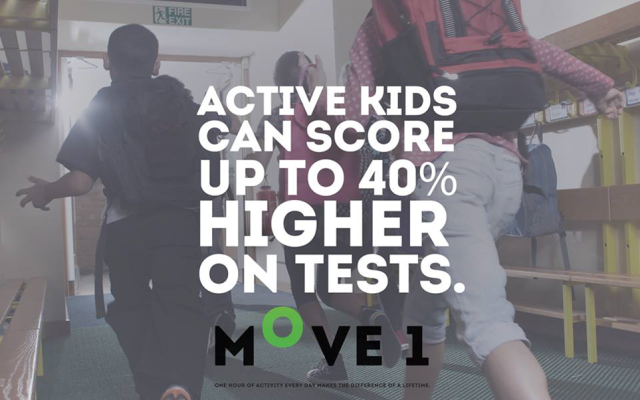 My view is that saying children “can score 40% higher on tests” is a manipulation of the original research to the point where it is deceptive. Not intentionally deceptive. But still deceptive. I suspect that the enthusiasm of some evangelical physical activity promoters is overriding reflective, considered practice.
Joe Piggin

Some caveats: Of course there are numerous reasons to promote physical activity in schools and I appreciate many organisations are just trying their best with limited resources to promote it. But we should be wary of evangelism.

One thought on “A Great Fallacy in Physical Activity Promotion”